There are a lot of people out there who think marriage is greater than sliced bread, or it's better than apple pie, or even that it's the greatest thing that can happen to two people.  I don't eat sliced bread and apple pie is just okay with me, I'd rather have blueberry... or peach.  As for the greatest thing that can happen to two people?  I guess that would be just fine, if divorce didn't get in the way.  Now I'll admit that the romantic allure of marriage can sometimes be overwhelming.  So much so that some people tend to do it over, and over, and over again.  If you're a Christian, marriage is supposed to be a Holy Sacrament, a vow before God, yet in the state of Pennsylvania at least 63% of all marriages end up in divorce.  So much for the sanctity of the vow.
There are several reasons why marriages fail:  people get married because they don't know the difference between love and lust;  familial pressures, you just need to get married, society expects people to get married, it's what everybody does, isn't it?  And let's face it, divorce is cheap.  What's a couple hundred bucks, especially if you're blaming someone else?  And let's face it, blame is important.  Everyone wants to point the finger at someone else, and even, on those rare occasions when someone does admit to being at fault, there are always qualifications. 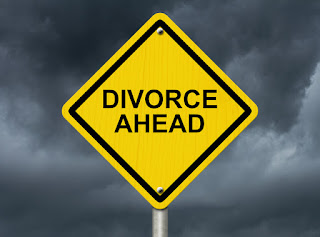 Besides, divorces aren't that expensive.  In fact, ending a marriage can be a lot cheaper then actually staying together.  Marriage is a business contract, after all, in spite of all the romantic trappings used for decoration.  If it were far more expensive to get a divorce, I suspect a lot of people would take a lot more time thinking about just what they're planning.  Having said such, I think all states should enact a Divorce Tax.  If you want to get married, well, that's fine, however, if you want to get a divorce you have to pay a tax.  I think 10% of the cumulative gross wages  earned during their time of marriage would be a nice round figure.  This means that if a couple gets married, and stays married for 5 years, and the total gross wages both of them earned during that 5 years totals $300,000, they they would owe a Divorce Tax of $30,000.
Now I know there are people who are going to say "Holy Crap, that's too much money, I can't afford that."  Well, then maybe you shouldn't be getting married in the first place.  Commitments should be cheap and in today's world marriage is a cheap commodity just about anybody can afford.
Posted by Dave R at 9:25 AM