Holy Moly!  I got almost 7 hours sleep last night with only a short (28 minute) heating pad session around 0330.  I have not gotten that much sleep in a long time.  And  it's wonderful!  My body battery is recharged, at least that's what my Fenix 6 Pro tells me.  I could easily slip in another few winks, but I do have to work today.

I bought a new shower head before I left work yesterday, this one includes a 'hand held' that I may use sometimes.  This is replacing a Delta that sprayed out the shower door onto the floor.  This was more of a nuisance rather than a hazard, having to mop up the floor every time I showered.

And some of my dahlias in the backyard have finally begun blooming. 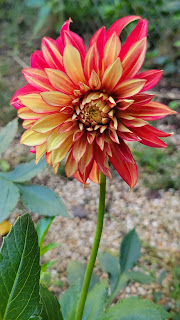 Not surprisingly, the Republicans are still moving ahead with their phony audits in a number of states.  At this point, they are on only hoping to sow discord among their base, pushing the concept there's fraud in every election they lose.  This is merely a reflection of their Savior, the Orange Anus' own ego.  Oh, and speaking of Loser #45, I understand he had one of his minions remove praise  of Cyber Ninja because not only did they failed to feed his Big Lie, they reported he had lost by an even larger margin.
And not a small number of Texans woke up yesterday to discover that overnight their groveling governor had cowed his head to the Orange Anus; there is going to be an audit in several counties even though the Anus won the state.  Evidently, the OA has set forth a new commandment:  Let there be an audit to grow disatisfaction.