Happy Saturday!  Today is my 13th anniversary of working for the orange home improvement retailer.  This is the longest I've ever worked for one specific company, not that feel the need to change jobs every 10 or 11 years, because like so many other workers in America I've been laid off.  Twice.  From 2 major corporations that proved they were inefficient at dealing with change.  Not that I'm complaining.  I received good severance packages from both that allowed me to pay off my house, go to France, buy my first boxer, and so many other things.  I do believe dealing with their failures have made me a better person.

I don't know if I mentioned it, but I bought a portable heating pad to wear under my shirt while I'm at work.  The meds, ibuprofen and naproxen, don't really help much, but heat therapy?  Simply amazing.

And, of course, I do have to go to work today.  I had a very large sale yesterday, blinds, almost $6000.  A couple with 5 boys are buying a new house, in fact they were the reason the wife said they needed to buy blinds... almost $6000 in blinds.  She was the driving force behind the purchase.  The husband was nice though hesitant.  I'd have been more than hesitant.  I can think of a better use of $6000.

I also have another flooring sale going through today that's close to $8000.  They're going to miss me when I go part-time. 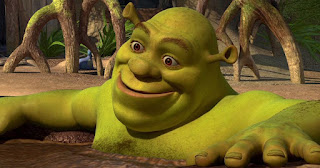 Why the picture of Shrek?  Well, in case you haven't heard Tik-Tok is the advance guard of the cavalry in Texas.  A number of content providers on Tik-Tok are so furious over that Texas anti-abortion they've been flooding the 'whistleblower site' with Shrek Porn, among other things.  Or I guess I should say they were flooding it.  You see, the site was hosted by GoDaddy and GoDaddy has dropped it because it was breaking fundamental rules.  What rules?  How about gathering personal information about people without their authorization?  You see the idea was to turn average citizens into vigilantes, providing anonymous tips, making accusations about women without needing to provide information about themselves.  In other words, anybody can be an accuser with no accountability for their accusations.  Just think about the legal ramifications.  Guess who looks bad here, besides the Texas legislators?  And that dumb shit Abbott who signed a piece of legislation that is so obviously flawed?  Those 5 conservative members of the Supreme Court who let this law stand.  Evidently not one of them is a true constitutional scholar.