As with most Americans, this is a day of Reflection.  The terrorist attack of September 11 shocked the world in a way unlike any other in history.  Those zealots who few planes into the World Trade Center and Pentagon thought only that they were declaring war only on America.  Those working in those buildings were of no concern.  So many nations lost citizens that day, for not only did Americans die, but also Swedes, and Germans, and Spaniards, and Britons, and Canadians, among so many others.  These zealots failed to comprehend how many citizens of the world were employed at the World Trade Center.  Narrow minds see only narrow paths.  For a brief moment, the people of the world were united.

Everyone remembers 9/11.  Many take time and think of where they were when those videos started flashing across TV screens and computer monitors.  I was working for xpedx, the distribution arm of International Paper.  One of our centers was in Hoboken, so while others desperately tried to find out what was happening, I called one of my contacts there.  The phone rang and rang, before a voice answered and was told they had lost contact with several delivery trucks that were in New York that day.  Communications were down.  When I asked about my sales rep, I was told he was on the loading dock.  "Everybody's on the loading dock watching."  I will always remember that voice telling me that.  "Everybody's on the loading dock watching."  I can't even begin to imagine their horror. 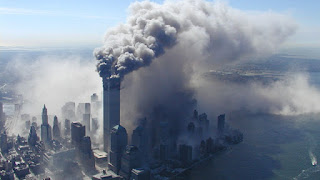