Well, it's Monday, Labor Day, and a paid holiday, and not only that, I don't have to work.  There will, however, be unpaid work done here.  Laundry is stacking up.  I need to drive to my local Giant Supermarket for a few food necessities for the up coming week (veggies).

I was at my brother's for a small get together yesterday.  It was drizzly.  I think that's a new word.  I say this because I've just used it in The Body in Repose and Word highlighted it for spelling.  I like it, so I'll let it stand.  Anyway, during the conversation, some of his free range chickens entered the picture, literally. 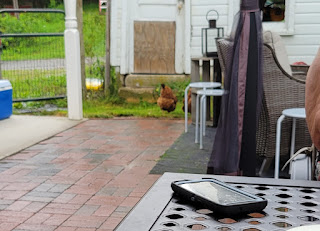 Biggie gets Carprofen, a doggy NSAID, because like me, he has a touch of osteoarthritis.  My vet would rather I purchase his med from them, rather then through Chewy, however Chewy is much cheaper.  A tip of my hat to my sister in law (Jacquie (sp)) for giving me a work around for this problem.
And since it is a holiday, the news is slow.  Usually nothing politically groundbreaking happens on a holiday.  So today, in spite of the chores I need to do, will be spent relaxing, especially since I didn't get much of that yesterday.  Tomorrow, I'll be posting a family picture.  Now, won't that be nice.
Posted by Dave R at 8:36 AM