CPAC was a bad place to visit this year.  At least 5 Republican Congressmen have gone into self-quarantine.  You do have to remember, however, that CPAC is a gather of older, white Crazy Christians desperate to force the country down the narrow path they hold so dearly in their hearts.  It looks to me as though they've been given a Sign (capital S), not that they're going to recognize it as one.  That would mean they've made an egregious error.  Personally, I think it's a bit of a hoot, those holier than thou individuals on their way to becoming a Coronavirus hotspot.
There were some of the Idiot Jerk's supporters at the flooring desk, an older couple, he was wearing an camo cap with the Idiot Jerk's name emblazoned in red.  They spit out the same phony talking points the Idiot Jerk spits out: "more people die from the flu."  We all bite our tongues.  Correcting customers is not in our job description.  They do not understand, but every time the quote the Idiot Jerk, they are a Sign of his imminent downfall.  People want the truth.  He tells them what he thinks will make them happy.  The sad truth is he's only concerned about Wall Street.  The sadder truth is that this older white couple don't know they are the primary targets of the Coronavirus.
And, back to those 5 Congressmen in self-imposed quarantine (at least that's what they're claiming).  One of them just happens to be the 'new' Chief of Staff.  Son of a bitch!  How's that for bad luck?  My money says the Idiot Jerk is just about in a frenzy behind the scenes.  He's a fat, yellow-skinned (by that I mean cowardly) old man whose sloth-like body offers little defense against the new virus.
The sad truth is, rather than admit this is a serious health issue, he's going to wear a MAGA cap to the CDC because this is an election year.  Oh, and now he's talking about payroll tax cuts, and extending sick hours... for something he still calls a Democratic Hoax.  Really, all he's looking at is the Dow Jones.  You know how it works, a tax cut makes the stock market go up and his orange ass looks shiny.  If you give voters a tax cut they'll vote for him this November.  This is not the kind of Sign Americans are looking for, which is why he'll go down as the worst president of all time.
Finally, speaking of Signs, Tacx likes it when you post an image of yourself.  It can be a photo, or a letter, or drawing.  I had thought of using a picture of the dogs, but, well, there are 2 of them and their heads would have to be rather small.  Then I thought about where I live, not only in Pennsylvania, but in Pennsylvania Dutch country.  We do have images that represent us.  So I chose one of those to be my sign.  Here it is: 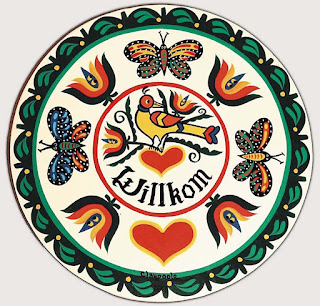 For those who don't know, it says "Welcome."