Well, it's Saturday morning and jumpin' Cracker Jacks am I up early!  Full bladders caused the dogs to get me up around 0330 and since I had the coffee maker already prepped, I decided to stay up for a bit.  I still have to go in to work, but I might sneak back into bed to take a bit of nap before then.
Yesterday I sold some blinds to a customer who... gets on my nerves.  She's loud and impetuous and is constantly asking "don't you like that?" and "don't you agree?"  In her 70's, she decided to buy a new (older)( ranch house and is basically having it rebuilt.  Her back yard is being turned into a Japanese Garden, pea gravel, no grass.  She has been going back and forth on the number of blinds she wants.  She wanted to avoid a vertical blind for her sliding patio door because she wanted to replace the door... until she discovered how much it was going to cost.  After she had paid for them and gone home, she realized she had ordered 1 to many blinds, so I had to credit her account for the full charge and rebuild her blind order with the change.  I don't have to be a licensed fortune teller to know there are going to be future problems.
So, the Idiot Jerk declared a National Emergency yesterday and the stock market rallied.  I had to laugh.  The Democrats had a Family Health package in place and the GOP baulked.  They wanted some of the Idiot Jerk's ideas included, like cutting your payroll tax, of course you'd owe taxes at the end of the year because they weren't going to change the tax rate.  They wanted something other than completely free testing for everybody because they believe their tax dollars are more important than human life.  This is to be expected.
I saw where Ted Cruz is extending his self-quarantine by another 2 weeks but says he has not tested positive.  Ted's a cowardly sack of shit, isn't he?  Supposedly deeply religious, he needs to put his faith in God and go out an mingle.  That'll never happen.  I think we need to change the definition of GOP from Grand Old Party to Gutless Old Party.
Companies shutting down for 2 weeks?  That's amusing.  The virus is active in humans for 37 days, so unless the entire nation shuts down for 7 weeks and nobody goes absolutely anywhere, or has an social contact what so ever, all you're going to get is 2 weeks paid vacation.  Three to four weeks from now there's a possibility you just might get sick.
As for the stock market rally?  That's a hoot from hell.  Because the administration downplayed and denied the seriousness of this virus, testing is still pretty much a shit show.  This means that unless you meet the specific criteria set up, you are most likely not going to be tested.  At present, under the limited testing, we are getting about 500 cases a day.  Son of a Bitch. This thing is all over the place, and it's the Idiot Jerk's fault.  His party is going to lose a lot of old MAGA heads.  As conditions worsens and more and more closure happen, Wall Street is going to go down.
Anyway, on the Brighter Side, my daffodils are preparing to bloom. 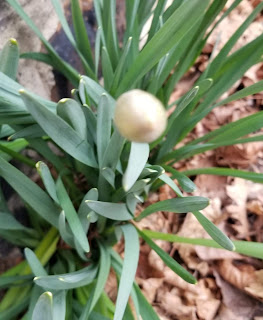