I didn't see that coming...

I get to go to work today.  In case you don't know, you're not seeing my excitable side.  There is no shiny, glittery aura surrounding me at my anticipation of spending 8 hours at the flooring desk.
Yesterday saw me having an enjoyable ride in Catalonia.  That as fun.
Yesterday also so the first case of the Coronavirus in North Carolina.
Oh, and the Fed did what the Idiot Jerk in the White House has been shrieking at them to do for months:  drop half a percentage point off the prime... and the stock market dropped 800 points.  Oh... shit.  That wasn't supposed to happen.  I can say with much certainty that many Republicans scratched their heads and said..."I didn't see that coming."  And, of course, the Idiot Jerk was looking for stability... and that didn't happen.
I saw a funny little clip of him in a meeting saying he thought the government would have a vaccine for the virus in 2 months...  Surprise.  He frowned when he was told that was not likely to happen.
Holy Crap.  And his administration is thinking of using our taxes to pay for the medical the expenses for those uninsured people who need to be hospitalized because of the Coronavirus.  Isn't that what Obamacare was supposed to do, make sure everyone was insured.  Wow!  and this from a Republican.  I didn't see that coming.  Must be because it's an election year.
And, speaking of the election year, Joe Biden did well yesterday... very well, indeed. 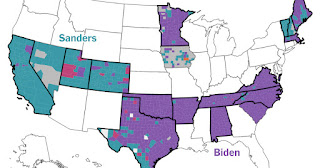 Joe was looking happy.  Bernie was looking a bit... burned.  He thought he had Texas in the bag... oops.  He also thought that after yesterday he was going to have a lock on the nomination.  That didn't happen.  In fact, to his terrible chagrin, Uncle Joe is now seen as the Front Runner.  You can be Bernie didn't see that coming.  He spent a lot of time and money in both California and Texas... oh dear.  And the reason many turned out to vote for Joe?  They believe he's the only one who can beat the Idiot Jerk.  This morning I saw one of Joe's campaign slogans:  "Let's bring values back into the White House."  Betcha the Idiot Jerk didn't see that coming.
Posted by Dave R at 6:35 AM