I start my 'off a day, on a day' week with drizzly weather outside.  I am not excited.
For a number of years, I've hung a Warwick Rowers calendar on my wall.  This year will be the last.  The days of rowers coyly hiding their privates behind oars, and soft drink cans, and tea pots are gone'; there's nothing cutesy in this year's calendar.  Their strength was always in their humorous visuals, rather than in simple nudity.  This is not the case anymore.
Both Mayor Pete and Amy Klobuchar have endorsed Joe Biden.  I suspected this was going to happen.  The party is finally uniting.  Now we need Warren to do the same thing.  Bernie needs to be taught a lesson.
Interestingly enough, the Idiot Jerk in the White House has begun stepping up his attacks on Biden.  This is why he tried to blackmail the Ukrainian President.  Dirt on Biden was essential.  He can only survive on dirt.  He needs to feed his base an angry little chant, like 'lock her up.'  The dumb shit tried it with the Coronavirus.  At first it was the 'next great Democrat hoax,' but he dropped that line as cases and deaths continued to mount.  The he put that Crazy Christian Pence in charge of a task force.  And then again yesterday the Idiot Jerk said something like "I have really, really good doctors who are working on a vaccine, maybe even a cure."  He doesn't want anybody challenging what he says, so nobody around him has a brain.
And speaking of that silly little task force, a number of Crazy Christians published pics of that group praying yesterday.  Instead of relying on men of science, that fool Pence is going to pray for guidance.  He did this in his approach to HIV while Governor of Indiana which resulted in a mini-epidemic.  This man is just like the Idiot Jerk in the White House... dumb as a brick.  The first thing that went through my head when I saw that photo was "what the hell is going on here." 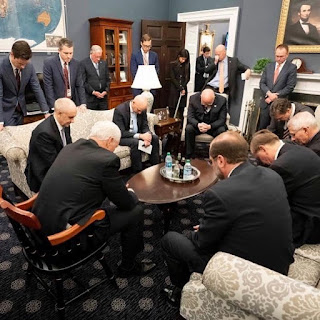 This is a pictures of fifteen white guys (and 1 woman) praying.  That's right, Pence has assembled a white task force made of of middle-aged and aging white men.  Were there no Asians, no Latinos, no People of Color smart enough to make the cut, or he just more comfortable surrounding himself with white Christians?  This train wreck is not even going to leave the station.
Posted by Dave R at 6:09 AM