Panic at the CDC

It's Saturday and it's one of my off days.  I had requested it off because today is the first Saturday in March, the day we hold our Kid's Workshop.  We usually have between 280 and 310 kids and their parents showing up.  This is good for families, good for communities, and also very good for business since their parents almost always buy something.  But not today.  Our Kid's Workshop has been cancelled because of the Coronavirus.  I suspect this will be the first of several.  You see, the Coronavirus has come to Pennsylvania, one in Delaware County and one in Wayne County.  This was to be expected.
My plans for today are simple: cut my nails, get in a bicycle ride, and spend some time on my Greek.  That's right, now that the book is (for the most part) finished, I have some extra time on my hands.  One of the things I had done was buy a workbook to help with learning the Greek Alphabet.  That has proven a great help, since I now know letters and sounds.  Believe me, it's a lot different than English but much closer to Latin, which makes sense since the early Greeks had a tremendous influence on early Italy.
And, of course, so much about what this Administration has been telling us about the Covid19  is based on the Idiot Jerk's hunches.  He actually said that.  The World Health Organization feels the mortality rate is around 3.4%, however they also tell you that might not be correct because of America's botched response.  That's right, the Idiot Jerk's reliance on his hunches have botched the response by the CDC.  Not enough test kits, flawed test kits, no real sense of urgency, all because he thought we were going to be immune.  Another of his hunches?  This case is going to stay on the West Coast.  As of this morning, I believe 25 or 26 states have had patients with positive test results.  This thing is especially serious to Senior Citizens and those with underlying health conditions.  Overnight 2 patients in Florida died.  Do you have any idea how many Senior Citizens live in Florida?
Anyway, yesterday the Idiot Jerk actually went to the CDC.  His trip was on, and then off, and then finally on, no doubt because someone told him it would look terribly bad if he didn't show up.  And they took pictures, no doubt to prove he was actually inside at least one of their buildings. 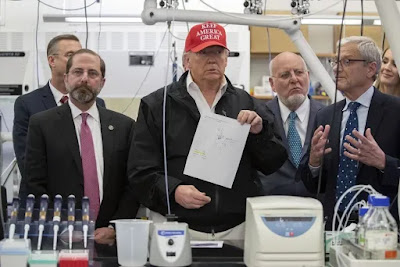 Look at the panic on this man's face.  Do you see how his eyes aren't really focusing on... well, anything.  Or, maybe he's trying to focus on a teleprompter and someone keeps moving it.  Or maybe the thought rattling around inside his brain is "don't touch anything! don't touch anything!'  In case you didn't know, this is what panic looks like.