Well, it's Monday morning.  This is going to be my hump day at work.  Wouldn't it be nice if I could say it's all fun and games?  It isn't.  I had to deal with some stupid people yesterday, but then isn't that normal.  Like the customer and his wife who returned blinds because they didn't fit.  He claimed that he'd measured the window and the blinds didn't fit.  Rather than remeasure the window to verify he had the right size, he measure the blind: 34 7/16 inches.  I explained to him that the way we cut blinds does not provide us with that kind of precision cut, and that usually there is a 1/4 inch variation.  That's when I found out I was talking to an over wrought wall.  His frustration abounded.  His old blind was different.  The end caps on the blind he and his wife had returned were thicker than those on the old blind.  Why did they have to change the thickness of the end caps?  If they hadn't changed them, the blinds would have fit.    Now they needed blinds cut to 34 7/16 inches.  This man was totally out of touch with reality.
Then there was the woman who wanted to put 'peel and stick' floor tiles on her wall... and couldn't understand why we didn't have matching trim so she could frame out her door.  "What do you mean they don't make a matching trim?!"
Believe me, the bus load of crazies pulled into our parking lot yesterday.
Oh, and the Idiot Jerk made a 'potty tweet' about Adam Schiff.  He is such a ass.  He is a true representative for the Republican Party.  For those who don't know, he will try and consolidate the hatred.  He's already trying to get his wagons into a protective circle.  Those who might represent some semblance of order will be out.  He'll fire them.  He likes to fire people.  Firing people gives him a sense of the power he so desperately wants.  He wants to replace them with people who will cut throats, and stab in the back.  But then, few should be surprised.  He is, after all, one of the greatest backstabbers in America.  He will, given the chance, stab his on spawn in the back.  Donnie Jr?  Watch you back, bud. 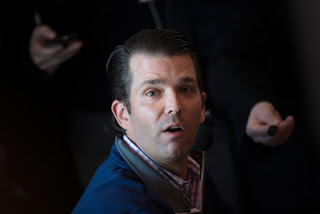