It's Cyber Monday!  I'm off work!  And today I'm going to go to the courthouse in downtown Harrisburg to probate my Mom's will.  My checkbook is going to be in my back pocket.  I suspect taxes will have to be paid... though I'm not sure.  She and I had joint checking and savings accounts for the past... oh, 5 or 6 years, and I was the beneficiary.  I will have to wait and see.
I went to see "Fantastic Beasts: The Crimes of Grindelwald" last evening.  On average, I thought it was good, slow at the beginning with a noted improvement as the story unwound.  They take a lot of time to get the characters reintroduced... or introduced.  Not surprisingly, Johnny Depp plays a deplorable villain no doubt because his career requires him to just shut up and give the director what the director wants (I understand Disney fired him - no more pirate movies for him).  Ezra Miller proves he's a pro when it comes to brooding attractively.  A bearded Jude Law brings a good diversity to the cast.  The first film was pretty much a star vehicle for Eddie Redmayne, however, if Law's presence is any indicator, the following installments will have a much more ensemble story line  which is fine with me.  I'm not a big Eddie fan.  Oh, and installments is the correct word.  Originally slated as a trilogy, it now looks as though the decision has been made to stretch this thing out into 5 films.  That's a problem since a lot of the ticket buyers for this movie bought tickets for the Harry Potter series... and they're getting older and older. 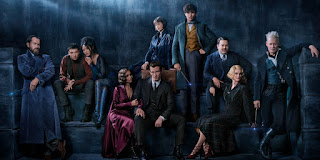 Oh, and I saw there was some pseudo-violence down at the Mexican border.  The Idiot Jerk wants to seal off the entire border.  You know, they really do need to keep those dark skinned people out of this country.
And this AM, listening to the news, I heard that that the Mueller investigation is going to be devastating to the Idiot Jerk in the White House.  Subpoenas all around, perhaps?  Early Christmas presents.  While nothing concrete has been leaked, shutting down the investigation now would devastate the Republican party.  The Idiot Jerk's approval rating would plummet.  There would be massive protests.  Anger would rage.  They know this.  Donnie Jr may actually be indicted for Treason.  I do believe that is a hanging offense.  Gee, if that happens, I wonder if Cindy Hyde-Smith is going to want a front row seat.
Posted by Dave R at 7:26 AM