Feeding the hate with Republican propaganda

Well, the vacation is over.  I'm going back to work this morning, moving into a new position where I'l be trading the overnights and heavy lifting for Front End Drama.  Things will be fine.  I didn't get as much accomplished last week as I had planned, this is almost always the case, though after last week, because of the all of the rain, my 'to do' list is still rather long.  Oh, well, it will get done in time.
One of my friends on Facebook is an old Navy buddy of mine and quite the conservative.  As a result we 'tit for tat' back and forth, mostly he poses Republican propaganda as truth and I, very politely, run it through the wood chipper of truth.  Right now, for example, or maybe it was last week, I can't remember exactly when because they pump out so much propaganda, they were pushing some phoniness about Hillary losing $6 billion while she was Secretary of State, and of course my friend piped in as though this was gospel.  So, I did about 10 minutes research.  There's pretty much on the Internet, almost all on "conservative" websites and all anti-Hillary, except for Slate.  They actually provided a link to the actual documents: a report from 2014 from the OIG that went back 6 years contracts that were missing documentation.  That's right, 2014.  The one day that pops out is from May of that year, when George W. Bush was in the White House and Condoleeza Rice was Secretary of State. 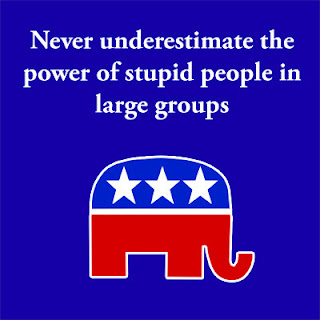 A number of these contract issues were with the WPPS, and some of the dates listed go back to 2007.  Of course, that type of honest is not going to appeal to the Republican Party.  They're going to throw as much shit on the wall as they can because they know eventually something is going to stick, a least for a few minutes.  Feeding the hate, you know, they're all about feeding the hate.