Of Bourne and Trump

So I went to see "Jason Bourne" last evening and this was supposed to be about the movie, but then Trump spoke yesterday... about party unification, at least that is what both his campaign and the NRA are saying.
Anyway, back to "Jason Bourne" - Matt Damon is good, Tommy Lee Jones is great - but then he plays a prick and he's always been good at playing pricks, in fact, I hear he plays a pretty good prick off screen as well.  In fact, there is a resonating resemblance between Jones' need to control and Trump's, though one is grounded in ruthlessness and the other in buffoonery. Watching Jones act and react gives you insight into his character, how dark he really is, where as Trump is all about inciting his Trumplodite hoards.  While they elbow and wink at each other thinking his comment about the 2nd amendment people is so sly, Independent voters and moderate conservatives cringe.  He is the reason people are beginning to say "if the election were held today, Hillary would win by a landslide."
The big problem with "Jason Bourne" was... well, if you've seen "Now You See Me (2)" you know the plot because it's been used before.  When one of the minor characters says "this could be worse than Snowden," I knew the screenwriters had failed to get on the original story line bus.  Outside of the chase and fight scenes, there's not a lot of originality here.  The same thing is true about Trump who is nothing more than a 2nd rate wannabe dictator, relevance is important and he is rapidly becoming irrelevant. 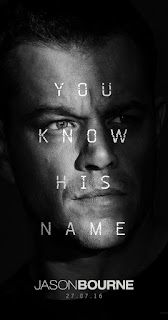 "Jason Bourne" tries really hard to be a thinking man's thriller... and succeeds most of the time.  Trump, on the other hand, wants to be... well, not president, the definition of that office does not match Trump's ambitions, and the Constitution was just not written to suit a "reality star ruler."