Once again the weekend is upon us.  These are the days that I work.  Six hours are scheduled today.  I'm taking a salmon steak in for lunch.  Maybe douse it with a little lemon to give it a little twang.
We might be busy at the store, and than again, maybe not.  We're still in the winter doldrums as far as carpet installations go.  That doesn't mean we might not get any window treatment customers.  Honestly, I have so little patience when I deal with them, mostly because so many of them come across as indecisive when it comes to just about every decision.  Color:  Snowstorm white, or pearl white?  There's not a lot of variation between the two.  There are literally twenty different shades of white and some customers will spend up to an hour trying to decide which shade they like best. Corded or cordless?  Corded are less expensive but cordless are easier to operate and safer, especially if you have cats or kids.  As a result, I usually try and hand these customers off to one of my fellow associates.
As some of you know, when I include and actual location in my stories, i.e. the French Quarter in The Body in Repose, I learn as much as I can about the place without actually going there.  I've been doing the same thing with Mackinac Island, which is renowned for it's fudge.  And, since one of may characters is a candy maker, I decide to order some fudge.  To put it mildly, This Stuff Is Freaking Great!  Believe me when I tell you I could live on this fudge, of course, I'd end up being the size of 5 or 6 houses, but I wouldn't care.  This stuff hits all the right neurotransmitters.  I bought it from Murdicks. 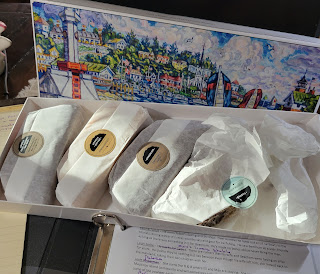 Evidently Rudy the Geee, didn't like Eminem taking a knee during the half-time show, so Stephen Colbert put together a little response.  This is more than a little amusing, and I'm betting Rudy said more than 'oh, fudge.'
And I something amusing about Melanoma Trump squeezing out some pissy moan about how the media was handing her a never ending river of fudge no matter what she did.  Take the issue with her setting up a a scholarship fund for Foster Children.  She when to great lengths to point out this was not a tax exempt group.  And, as usual, Loser #45 weighed in with a sentence or two before he started complaining about the fudge, and how the media kept claiming his samplers were rancid.  This loser will never stop.
Posted by Dave R at 8:35 AM