Hello, Saturday.  Another work day, but only for 6 hours.  I can handle that.  Of course, there's not telling what kind of customers we'll be getting.  Temps are supposed to be cold, but the skies clear.  Income Tax refunds are already dropping into bank accounts even though the IRS has warned Americans that this year they might be late.  I know they're dropping, mine went in last week.  But then, I'm not like so many who chose to procrastinate.
Pork chops were made in the air-fryer last evening.  They were delicious.  The dogs, of course, had the fat drizzled over their dinner.  I was surprised by how much fat cooked off.  Biggie and Lily were extra-specially happy. 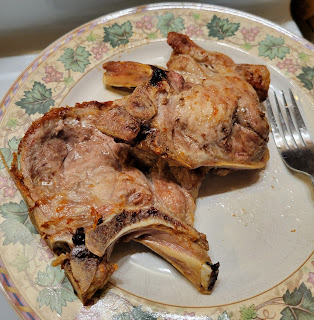 Yesterday was busy.  I bought and set up a new tank in the living room.  37 gallons.  The plan is to move all of the fish from the big tank into the smaller one, dose the big one to get rid of all of the algae once and for all, and them move some of the fish, like the angelfish, back.  The new tank is high, so I may end up turning it into a schooling fish tank.
Spotify has begun removing Rogan podcasts.  I thought it interesting they were (in their words) taking down some of the comedians more racist podcasts.  That's right, he's a comedian.  Now, isn't that a surprise.  Personally, I think he's more of a joke than a comedian.  There is absolutely no wit in that man.
And Mikey Pence told the world Trump was wrong, that he couldn't have overturned the election.  "No one man should have that much power," he said.  duh.  This man still has presidential ambitions.  duh.  Can we talk about his lack of brain density here?  He really needs to go to the January 6 committee and 'fess up.  The presidency is not in his future.  If he wants to be remembered into the foreseeable future he needs to show his mantle and bring down his former boss.  Will he?  duh.
Posted by Dave R at 7:51 AM