I cut my nails this morning.  Yeah, my life is interesting.
Yesterday, when I came home from work, the temp was 95 (F).  That's a little toasty for late August.  We're supposed to have more of the same today.
And evidently the Idiot Jerk in the White House warned Evangelicals that if mid-terms don't go his way Liberals are going to violently change everything he has done... for the Evangelicals.  In case you don't know it, this is how he tells them to get out and vote.  To be perfectly honest, that pissed me off just a little.  He also told them he had gotten rid of a law which prevented their churches from being political entities.  Well, that was a lie.  However, once we take over the House this November (and possibly the Senate) I do believe we should truly go about enforcing that law.  Separation of Church and State, you know?
For those who don't understand, Evangelicals are believers who need to control.  They are less about following Jesus, and more about controlling behavior.  They are all about judging and passing sentence.  Now, I know there are those who think these people should be some sort of moral quandary, who feel these people are the worst hypocrites in the world. Sure, they may run around whining that selfish little phrase "My Religion," over and over again, but make no mistake, this is not about religion, this is about power... and control.  They don't care how bad the Idiot Jerk is, how reprehensible his actions, as long as he gives them what they want: power.
If they want to act like a political party rather than a religious group, they need to be treated as such.  How do we do that?  Take away their tax exemption.  Of course, they would classify this a as violent action.
These people are the reason our Founding Fathers separated Church and State.  This is a minority group who needs to be treated the same way they, themselves, treat minorities.
On a lighter note, Dr. Kelli (what's her name?) and that racist Arpaio (sp ?) got their asses whooped in Arizona.
Later on this morning I'll send my brother a text.  See if it's okay to zip out to the farm on Monday morning for more nuts.  Now that I know what I'm doing.  Which is kind of embarrassing, especially when I'm talking about nuts.  Of course, this whole entry has been about nuts, hasn't it? 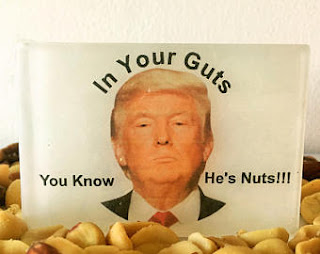