Well we had rain last evening...again, and over night... again, just like the Northwest.  For those who don't know, this is Seattle weather.  Ah, well.
So the dogs got cake and ice cream last night to celebrate Lily's birthday.  Not that they understood, but then they're dogs and aren't supposed to know what you're saying.  All they knew was they were getting yum, yum, good shit.  That's fine.
I had a customer looking for a blind yesterday - just one blind, to replace an old one.  The strings had broke and he could no longer get it to go up and down.  And he wanted a blind which would fit the brackets for his old blind.  His old blind was over 10 years old.  Brackets have changed.  They are no longer the little, plastic boxes with removable plastic face plates that hold your blinds in place.  They broke to regularly.  Now we have small, metal brackets.  He asked if he could use the same screw holes.  I said... "possibly, but probably not."  He got a bit flustered, "I don't have a drill."  Now, this customer was in his late forties / early fifties.  When he told me he didn't have a drill I was surprised.  I though everybody had one... well, everybody but this guy.  He should have kept his mouth shut.  No, he had to explain "I'm a paper pusher.  I don't do things like this."  And all I could do was stand there looking at him, a non-functional human being.  As old as he was, this customer was totally unprepared for life.  This guy is not alone.
I don't care who you are, there are certain essentials which you will need at some point or other during the years you spend on this planet:  screwdrivers (flat head and Phillips), a hammer, and a drill (no matter how small).  A saw comes in handy, too.  We had a customer three days ago who asked how to cut a piece of PVC piping.  When he was told a hacksaw would do the job in about 30 seconds he just looked at us... blankly... until one of my fellow associates pointed to the saws in the Tool Corral.  Without these essentials you functionality is severely limited to... well, paper pushing and internet porn. 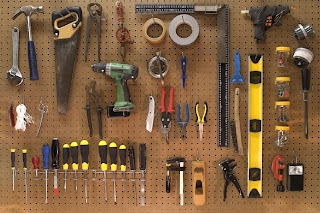 And here you thought I was going to write about the Idiot Jerk in the White House and all of the Tools he surrounding him.  Sorry, those are the wrong kind of tools.  Though I wouldn't be surprised if the customer without a drill had voted for the Idiot Jerk.  He had that kind of mentality.
Posted by Dave R at 6:48 AM