For those who don't know, today is the first day of The Tour de France, hereafter to be known as Le Tour.  Twenty days of racing.  Today's stage is a mere 201 km long.  In case you're wondering, that's a long bike ride.  Which is why I have a split screen.  One half to type this, the other to watch the race.
Complicating today's viewing is the fact that I have to work.  Not only do I have to work, they called to see if I could go in early.  Of course, I agreed since I'll get to leave early.  5 PM.  That's fine with me.
As most of you know, I'm a Cannodale fan.  I own 2 Cannondales, one old, the other brand spanking new.  I am rooting for their team.  The only thing they've done wrong so far is change their kit.  They went very pink this year. 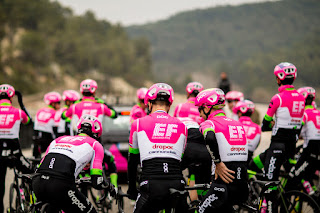 In spite of what some may think, I am not a pink kind of guy.  The pink is okay though, next year they'll move onto a different color.  At least it's not polka dots.  I remember one team wearing a kit made up of large, pink, yellow, blue, and green polka dots.  Horrendous.
And next week the Idiot Jerk goes to the UK.  Mainly to tour country homes.  Yep, that's what is on his agenda.  Oh, and he'll meet with Theresa May.  Hopefully he wont' throw Starburst candies at her.  Evidently they are doing their damnedest to keep him away from the massive protests.  Only God knows what that would do to his ego.
And I understand Pompeo has left North Korea without any agreement on just what denuclearization consists of, you know?  Like, that's not surprising.
Oh, and getting those little kids the administration chose to separate from their parents?  Evidently that's turning into a real cluster fuck.
Do yourselves a favor.  Turn on Le Tour.  Watch mens with legs of steel pedal across the roads of France at an easy 25 miles per hour.
Posted by Dave R at 7:33 AM