For those who don't know, or who have realized it yet, Monday, July 16 is a day that will go down in history as the day the Idiot Jerk in the White House publicly shit in his pants.  Fox News is not happy.  I mean they are really not happy at all.  I like the bit in the one article where the Fox News correspondent says "Mueller is safer in his job now than he could ever hope to be."    Then there's this bit from The Hill.  I've been telling people all along to just wait... well, now you know what we've all been waiting for.  Mid-terms are just around the corner.
And on top of the Idiot Jerk's really, really bad summit with his Blow Buddy Vlad, a Russian operative has been arrested.  She was trying to build connections between the Russia and... that all American, gun lovers association the NRA.  Oh, wait, I don't think I'm supposed to say NRA - the article just says 'a national gun organization.'  Of course, the Russkies aren't too happy because she's actually in custody.  That's not good.  They don't want their agent in an American jail.  Tough Shit.
Anyway, yesterday was almost like having Christmas in July.
The sad news is that the Idiot Jerk in the White House did exactly what his Blow Buddy Vlad wanted him to do, and said what he wanted him to say.  We have a sitting president who has been compromised.  Either he was thanking his BBV for getting him elected, or his BBV has some stinky dirt on him, like maybe a 'golden shower' tape.  Either way, we need to move him from the oval office to a jail cell.
On the positive side, his approval rating just took a broadside.
You're wondering if it's going to get worse for the Idiot Jerk?   Just wait for it.
On a lighter note, my car's lease runs out in May and I'm thinking of getting a Subaru and I can trade it in at any time.  You can build a 2019 Crosstrek on line, so I built one.  Yesterday I went to the only local dealer, Faulkner Subaru.  Well, the 2019's aren't actually going to be available until November, so they tried to sell me a 2018.  One that cost over $32,000.  No deals, no offers.  They low-balled the trade in value for my Nissan Rogue by $3000.  They wanted to sell that car to me at full price, even after I told them I didn't want it.  Interestingly enough, Faulkner has a Nissan dealership and they were advertising a 2016 Rogue for almost $5000 over what I was offered for a trade-in value.  These people will take advantage of you if you let them. 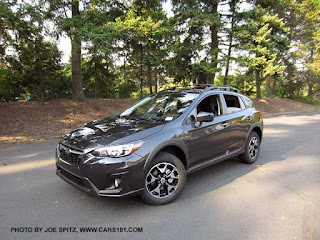 What I'll end up doing is driving a bit to a different dealership.  That's fine.  I'm going to buy this one rather than lease it so I want to make sure I get a good deal.