You don't have to spend much time looking at news articles to realize that Republican leaders are beginning growing concerned about... Donald, mostly because Donald's comments are incendiary.  Those in charge are worried.  The party may lose seats in both house and senate, the result of Donald's hate tactics.  A Latino judge is unethical, a Muslim judge could never give Donald a fair trial.  In the late 1920's and 30's similar comments were made in Germany.  They united hatred.  Now, I'm not saying Donald is another Hitler, that would be an automatic fail, he may, however, be emulating his attacks; targeting specific groups to hate.  While Donald's trumplodites jump up and down with glee, both he and they fail to realize all he's doing in marinating himself.  He doesn't understand that come November, he's going to be one of those burgers that falls through the grill. 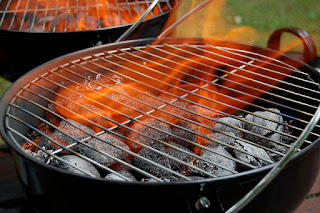 And his fat is going to sizzle.  And then the grill is going to catch on fire.  More Republican's are going to be burned.  They will lose control in the Senate.  Their power in the House will be severely weakened.  And do you think Donald  cares?  Hell no.  This is all about Donald.  And all of those silly trumplodites who think he's speaking for them?  They're wrong.  He's just using them the same way any dictator uses those loyal to him to stay in control.
And he will be grilled beyond recognition.  This is how things go.  His bad karma is catching up with him.
Posted by Dave R at 8:37 AM