Just a note on the Brexit thing

When I woke up this morning I had what seemed like thousands of notifications from the news sources I read detailing the UK's decision to leave the EU.  The headlines were amazing in that none of them were positive.  I liked the one about Billions wiped out, which doesn't mean that money is not going to come, it's just that this might not be a good year to retire.
I saw that Trump flew to Scotland and tweeted some sort of nonsense about England making itself great again.  We'll have to wait and see on that, won't we?  He's bad news in the US.  The presumptive Republican nominee for President has poll figures in the cesspool.  Anytime he's speaking, he needs to read from a teleprompter in order to keep from verbally shitting in his pants.  I can only wonder what turds of stupidity will fall from his lips while in Scotland.  The Scots, by the way, voted against Brexit.  They've been pulling away from the UK for years, so this might be the thing which permanently separates them.  Wouldn't it be funny if Scotland broke away from the UK and rejoined the EU. 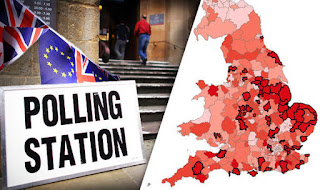 Anyway, we're in a waiting game right now, not about the global markets, but about the British Pound.  Will the world stomp it into the ground, or will the world let it come back.  Time will tell.