Trump and his Bargain Basement hatred

A long time ago, in Germany, a little man with a squirrelly mustache surfed a wave of antisemitism into power.  Donald Trump is trying to do the same thing, only this time the religion is Islam, not Judaism.  Should he ever become President he might actually attempt a ban on Muslims entering this country.  From what I've read, this would be a fail / fail situation for him, that doesn't mean that he and his Trumplodite base wouldn't try it.  Lucky for the rest of the nation, neither he, nor the sub-group to which he's preaching, understand his bargain basement politics are bound to fail.  His attempt to grandstand the horrific tragedy in Orlando is disgusting... no, nauseating is a much better word.  His attempt to create a tsunami of anti-Muslim sentiment becomes more and more ludicrous as we learn more and more about the shooter.  The picture being developed of Omar Mateen is one of a man seriously conflicted; sexual identity issues juxtaposed against a religion and, importantly, a father whose 'public access' show stridently objected to the Afghanistan government.  Of course, Trump has absolutely no desire to even slightly understand the complications here.  Nope.  He's got his Bargain Basement Politics neon sign flashing.  "Come on down," he's saying, "let me sell you a little Muslim hatred at a really great price." 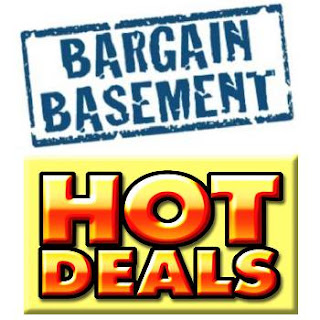 And that's exactly what his Trumplodites want.  Yepper.  In their little minds they're picturing Trump surfing into office on the crest of a wave of hatred.  They're not about making American great, they're about bringing America down to their level.  They want their racism equalized among all people.  They and their candidate will fail, of course, because America is great.  We are a good country.  When something terrible happens, the vast majority of us don't feed our anger by blaming some one else.  We good Americans examine, we investigate and try to understand what went wrong, and then we try and fix the problem.  Sometimes we're successful, sometimes not, but at least we're walking the good path.  No one is going to sell us a Bargain Basement deal on hatred.
Posted by Dave R at 7:54 AM