Michael Moore, not the truth you think he is

.'Like a lot of you out there, I signed the petition supporting Target for not buckling down to those crazy conservatives whose brains have liquefied into boiled hatred.  And now, like I suppose a lot of you, I'm getting emails from moveon.org.  Most of the time they don't bother me.  They do, however, seem to have a dire fascination with Michael Moore, as if he is their very own Dali Lama, of sorts.  I don't really care for Mr. Moore.  He makes documentaries that appeal to those on the left, and they don't mind that he picks and chooses what they see and hear.  He writes, directs, produces and, I supposed even edits his films.  I suspect he would like to think of himself as a god of the Liberal Elite.  Now, don't get me wrong, I enjoyed Fahrenheit 9/1, much of it was spot on.  However, not all of it.  Mr. Moore knows that in order to fill theater seats he needs to pander to his crowd, the same way Fox News panders to their crowd.  Neither is fair and balanced.  The truth always falls in between total opposites. 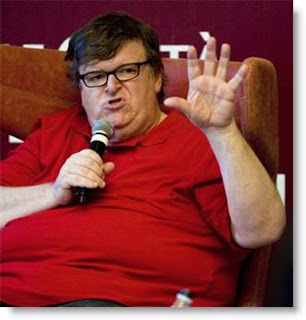 Knowing this, you will realized how not surprised I was to receive an email from Mike (since he's evidently now connected with Move On) asking me to donate money.  I'm sure a lot of you received the same email.  Did you notice how he didn't just hawk his latest film once or twice?  Nope, he brought up "Where to Invade Next," 4 times, and always tied to a donation.  And you know he's making money on what he's probably calling 'a tax free donation.  He donates XX copies and then deducts their value from his Income Tax.
Of course, there are a lot of people out there who do believe he is the God of Liberalism incarnate.  He isn't.  Nope.  He's just some fat guy with a bad rinse in his hair trying to make a million or too.
Posted by Dave R at 1:43 PM

Email ThisBlogThis!Share to TwitterShare to FacebookShare to Pinterest
Labels: Michael Moore, Moore, Where to Invade next