The not so funny truth about "The Nice Guys."

I've been off for the past two days and they've been busy.  I've moved my bank account, am now a member of Members First Credit Union.
I had to replace the remote control ceiling fan in the bedroom because Big Seig though the remote was a chew toy.  The only difficult part was standing on the bed to take care of the wiring.  The old one was white, the new one is burnished bronze.  And since I was replacing things in the bedroom, I installed new rods for the drapes - burnished bronze, of course.
got a new car, I'll talk about that later in the week.
Last night I went to see "The Nice Guys."  Ryan Gosling is cute.  Russell Crowe is burly.  Ryan is the funny one and he plays funny well.  Russell is the Bud Abbott to Ryan's Lou Costello and he does that well, too, most of the time, but not always.  When he isn't doing it well it's because of the script.  It's terrible.
The movie takes place in 1977 so I was expecting to be barraged by 70's music... not in this movie.  Oh, yeah, there are a couple of songs where you get to hear the intro, or the bridge, or the chorus in the background.  Boogie Wonderland gets played during a party scene.  That's about it. 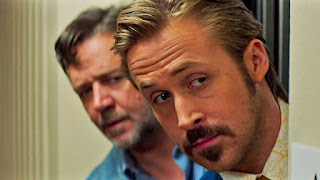 Had I been producing, this thing would have been pumped full of sound, it wasn't.
Except for the bits between Ryan and Russell, the rest of the script sounds like Screenwriting 101 (except for an interesting scene with a bee in a car).  As you're sitting in the audience watching talented actors struggle to give cohesion to a plot that is far more broken then Ryan's wrist under his cast, you can't help but be disappointed.  I'm not saying it isn't funny.  "The Nice Guys" is down right hysterical at times, but those times are tacked a broken armature, there's no purpose for them outside of just being funny.  Catalytic converters are not funny.  Ah, shit, that was a spoiler... but don't worry, it's spoiling nothing.