Why some would love to banish the 8 hour work day

While the rest of my work week has been scaled back during my recuperation, Mondays are still the same 8 hours on the clock.  For me, Monday is the day in which I verify numbers, analyze sales reports, go to meetings, and, if necessary make notes in employee files.  I'm will need to do the latter today.  While I was out, they decided to hire an individual who really shouldn't be in the paint department.  He's retired enlisted military who worked at a civilian job for another 20 years after retiring.  When I asked him why he was working since he was getting both a military pension and Social Security he shrugged and said "eh, it gets me out of the house."  Wrong answer.  You see he doesn't really want to work, he just wants to get out of the house.  He's 68 years old and doesn't really want to sit around at home, but he doesn't really want to work, either.  His customer service is very, very slow, not because of any physical restriction, but because he just doesn't see any urgency, no matter how many customers are lined up at the paint desk. 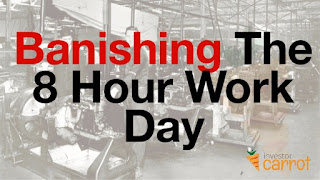 To be honest, he is only working part-time hours, unfortunately for him, we require all part-time associates to put in at least one 8 hour work-day over the weekend.  However, something always crops up in his personal life and he needs to leave early, this past Saturday it was a reunion of sorts.  We have a big sale coming up over the July 4th weekend and he was scheduled to work 8 hours on July 3, and.... he called to say he's going to be having some minor, surgery on July 3 and will need to be out for a week... over the holiday.
Anyway, he would very much like to banish his 8 hour work day and, as a result, I will need to take up some of my 8 hours today putting notes into his file.  I suspect that soon he will find himself banished from the time clock.