Eternity without a Break

My 82 year old mother is constantly berating me about my lack of religion, in fact, if I had a nickle for every time she's told me I need to find Jesus I could buy myself a really, really good bottle of wine.  This doesn't mean I don't want to be religious, it's just that in my mind there are several issues, one of the most important being the thing about 'everlasting life.'  I don't understand why anyone would want to have everlasting life, especially since you don't know what you're going to be doing.  The Bible isn't very specific about either Heaven or what you're going to be doing when you get there.  My Mom thinks it's going to be like an eternal family reunion.  Me?  I hate family reunions.  All everybody does is either talk about themselves or someone else, you know gossip, and it will never stop, it will go on forever, and ever, and ever.
My friend Hennie could sum up Heaven in one word: Bingo. 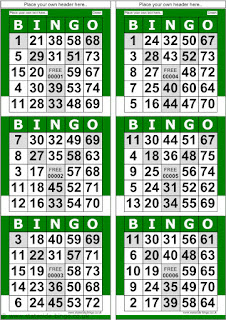 That's right, Bingo.  She loves to shout out "Bingo!"  People are warned to not get her started on the subject because she has adventure, after adventure, after adventure poring over her Bingo cards.  Me?  Hey, I like Bingo, but there's no way I'd want to play it forever.  I can't even imagine some never-ending caller shouting out numbers.  In fact, I can't think of one single thing I'd like to spend the rest of eternity doing, even playing Video Games, and I do like my Video Games.  It would mean never, ever being able to say, "gimme a break."

Email ThisBlogThis!Share to TwitterShare to FacebookShare to Pinterest
Labels: afterlife, Bingo, ever after, Heaven