Back to work / a color for Bristol and Rick

It's Sunday, and I've been back to work for a week, only 24 hours and with restrictions - like no lifting.  And boy, has this been an exciting week:  The Supreme Court made Obamacare immortal, they gave a thumbs up to Marriage Equality and Bristol Palin announced that she's pregnant... again.  Oh, and of course, she's Not Married to be baby's father.  One of the headlines I saw regarding this embarrassing issue had her saying she didn't want to be lectured.  Surprise!  No one is going to lecture, they're just going to point and laugh.  Oh, and I saw that Rick Scarborough never self-immolated.  For those of you who don't know him, he's the former Texas Pastor who vowed to torch himself if Marriage Equality passed.  Now that buffoon is saying he was just para-phrasing a song.  First of all, he's para-phrasing something from the book of Daniel, not a song, though I do remember singing a song in Bible School based on the verses.  Secondly, I doubt if any of Rich Scarborough's followers know what para-phrasing is, they probably think it has to do with paratroopers, maybe something they say before jumping out of a plane. 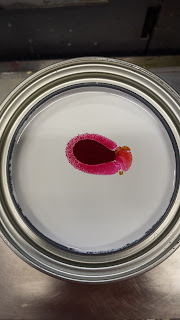 On a much brighter note, I did start to mix paint again this past week.  The above can will end up being a very nice geranium red; a color both Bristol Palin and Rick Scarborough might be enjoying these days.