E3 2015 is going on right now out in Los Angeles.  For those who don't know, E3 stands for Electronic Entertainment Expo and is The Show where studios talk about new games.  Also, for those of you who don't know, worldwide gaming makes $101.62 billion dollars.  Yepper, you read that right.  That makes E3 very, very important.  The big guns come out.  Now I know a lot of your are saying that's a lot of money for kids to be spending... well, it isn't kids.  Surprisingly, 26% of all gamers are over the age of 50.  I'm in that group.  I started playing because of hand / eye coordination, not that I had any problems, I just want to keep them in tune as long as possible.  All games use different button controls on the controller so you're constantly learning new moves.
The trilogy of Mass Effect games are my favorites by far.  I've played them through several times on different difficulty levels as well as with different characters.  You can even play as a female, should you want.  Mass Effect 3 was the first game to offer same sex relationships.  That's a biggie, believe me because anyone playing the game, whether as a male or a female, can have a same sex relationship.
The last Mass Effect game came out in 2012 so it's about time for another and everyone was hoping for some thing.  No one was not let down.  This is all CGI.  It's all done 'in engine' which means this is what it will probably look like on your television or computer screen.  Video games have come a long way.

Here is the teaser trailer for Bioware's Mass Effect - Andromeda. 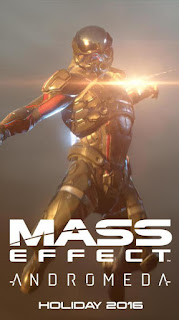