For a change it seems as if the forecasters got their weather predictions right, the cyclonic storm the Weather Channel has most likely named has arrived.  Snow and gusty winds up to 45 miles per hour has grayed the dawn.  Outside the workout room / computer room the river birch in my yard is jigging this way and that, iced over with shiny rain before the bottom fell off the thermometer.

I'm supposed to go to work today.  That's up in the air.  Right now I can see the blue house across the street though the heavy snow at times smudges the clarity.

Of course, the dogs are still in bed.  Why would they want to get up to go potty outside?

Biggie's heating pad arrived yesterday.  Unlike a human heating pad, the temperature is regulated and does not go more than a few degrees above his body temperature.  One of the things I'm not impressed with is the velour cover which I can see getting dirty in to time.

Milky Chance came out with a new song.  I like it. 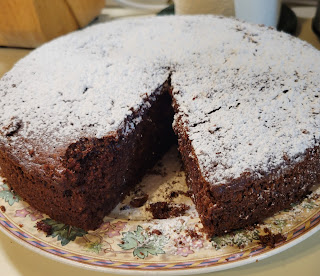 And, not surprisingly, 81% of Americans now support the Ukraine.  Many feel we should do more. that includes both Democrats and Republicans.  Amazing how there is something that can cross the aisle.  The 19% who disagree?  They are the Putin apologists and the MAGA heads.   I understand Trump refused to admit to his bro Sean Hannity that Putin was evil, or even bad.  In a very defining moment, Trump and his America First have proven themselves what we've known them to be all along: Selfish.  They're running into problems.  Americans, in general, are not selfish.  We have been raised to know right from wrong.  Everybody but Conservatives whose favorite pronoun is 'my.'  My money.  My taxes.  My guns.  My religion.  My rules.  I do believe most Americans would rather be a shining beacon than only ask "what's in it for me?" and "what do I get out of it?"  The Republican party used to stand for principles, now it stands for "me."