On Death and Dying

Yesterday was the Hump Day of my Staycation, could you tell?  I couldn't.

We had rain throughout much of the night, thanks to Fred, the Tropical Storm.  The original forecast was for 2 - 4 inches, that's been changed, though we're still under a flood warning.  Fred chose to take a route north that's farther to our west.  Pittsburgh's getting the heavy rain, not us.

Biggie has an appointment with the vet for next Friday.  He's a little stiff at times, so I suspect he and I are both suffering from arthritis.  Thanks to advances in canine medicine, his treatment will be much like mine, occasional meds.  He's going to be 7 years old in December, and large dogs are considered senior when they hit 6.

And, speaking of age in dogs, someone has a birthday tomorrow.  Miss Lillian D'Aubert is going to be 8 years old.  Rather then buy her a cake, I'm going to be baking her one, though I'll still be buying the ice cream.  Maybe I'll do a peanut butter frosting.  She loves peanut butter.  And yes, in case you're wondering, at 56 pounds, she's considered a large dog, though she is anything but senior.  That little lady is always running around with a squeaky toy in her mouth. 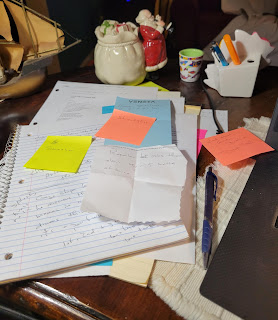 Wasn't it a shock to see that Abbott, loser governor of Texas, has tested positive for Covid?  They say he was vaccinated, and that it's a virus breakthrough.  I have to tell you, there is so much incongruity here: he doesn't advocate masks (they're a reminder Texas has a serious health issue), he doesn't advocate vaccinations, but he does advocate Regeneron's Monoclonal antibody treatment.  He has no symptoms, according to his spokesman, so why did the lying governor get treatment, the same treatment Loser #45 received at Bethesda, and a treatment that is very expensive?  I understand several clinics providing this very expensive treatment have suddenly sprung up in both Texas and Florida.  Leave it to damn Republican greed to make a buck out of death and dying.