I haven't written anything for a while, and with all of the shit going on all over the world, some may be surprised that my subject today is Caitlyn Jenner.  Glamour magazine recently named her Woman of the Year.  I find this rather funny.  Evidently Jenner has spent millions on facial reconstructive surgery in order to look like Caitlyn, and no doubt spent another small fortune in order to achieve an hourglass figure.  From the belt on up you do see Caitlin, however, from the belt on down, it's still Bruce.  The transition is incomplete, and, from what's getting spewed out over the Internet, that surgery might probably never occur.  So are we talking about  man or a woman?  Sexual orientation comes into play here.  Heterosexual women tend to have sex with men.  Yet according to Jenner that's not going to happen until after the surgery.  Which makes one wonder if Jenner is still having sex with women, and if that is the case, is that an indicator of Lesbianism? 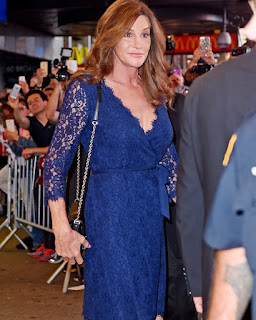 I don't care if Jenner's a Lesbian or not, but only having sex with women is a major complication, especially since there is guy gear involved.  This means nothing needs to be strapped on.  And, of course, is Jenner truly transitioning if the attraction is only for women.  There are women out there who have spent a surgical fortune in order to look like Barbie - that doesn't make them Barbie.  Emotionally Jenner may identify as female, but as long there's guy gear getting used in the bedroom, and there's no indicator of that guy gear ever getting removed, anatomically he is still Bruce.
Should Jenner have gotten the Glamour magazine Woman of the Year award?  Nah.
Posted by Dave R at 9:06 AM

Email ThisBlogThis!Share to TwitterShare to FacebookShare to Pinterest
Labels: Glamour, Jenner, Woman of the Year