Evidently there's this big to do going on about Reese's and their peanut butter Christmas trees and, since the Reese's factory is just down the road from me, I thought I might as well comment.  First of all, you have to remember that this is a piece of peanut butter candy dipped in milk chocolate.  Secondly, this is mostly to be eaten, not looked at.  I don't know anybody who unwraps a piece of candy just to look at it.  In fact, there is only one reason this candy tree even exists, and that is to be eaten.  You're not going to frame it and hang it over your mantle.  You're going to take a bite out of it.  It should not be about how it looks, but how it tastes.  Get over it people.  Still, there are those out there who want it to look a lot like this: 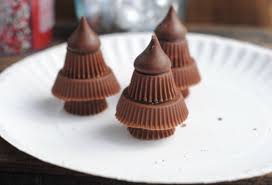 What's actually inside the wrapper is something like this: 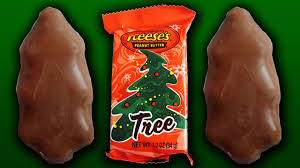 Now, I'll be one of the first to admit that this does not look a lot like a tree.  And I will also admit that perhaps Reese's went a little too far in calling it a tree.  Christmas lump might be more apropos.  But then I also have to admit it is just meant to be eaten.  In fact, the truth is most people will unwrap this bulk produced candy and shovel it into their mouths with out so much as a curios glance.  People, get over it!  There are more important things to think about in this world then they way a freaking piece of candy looks.  Like... will I be finding the new Fallout Four under the Christmas tree this year.