I am always amazed by the things which happen in Arizona.  Back in 2010 the state passed legislation which permitted law enforcement to stop any individual on the street (read Latino) and see if they were a legal citizen of the the United States.  Two years later the Supreme Court said about 3/4's of that legislation was unconstitutional.  Now the legislation has put a bill on Governor Jan Brewer's desk which is supposed to be about protecting an individual, business, corporation, etc and their religious beliefs.  What it actually says is that these individuals and groups can refuse to do business with gay people because it's against their religion.  What's next?  Arabs?  I mean there are a lot of people out there who really don't want to come within five miles of an Arab, so at some future date is the state legislation going to at Arabs to the list?  What about the Chinese?  There's a growing anti-Chinese sentiment in this country and, if you listen to what the Chinese government says, they are all atheist.  How can those deeply religious Arizona citizens even consider doing business with atheists!  Or what about the Hindi's?  I'm sure, if you ask a devout Hindu, he will tell you Shiva, the destroyer of worlds, has posted a target on Jan Brewer's ass.

The truth is this bill is not about religious freedom, it's about discriminating against gays, a minority group which is making great strides in getting equal civil rights.  They have always been a problem for the GOP and Arizona is a Republican state.  Marriage Equality bills as passing, slowly but surely, in state after state, and law suits are being filed as though paper were going to disappear off the face of the earth.  The Republicans in Arizona are merely trying to give some sort of protection to their base.  In doing so, however, they are legitimizing hate. 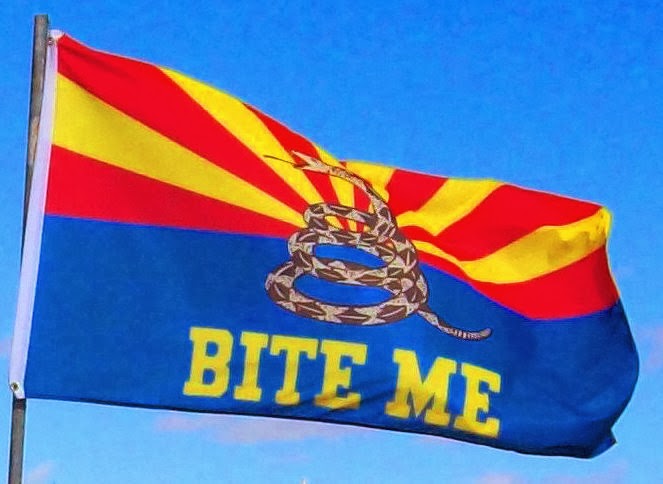 Right now this piece of legislation is sitting on Jan Brewer's desk, waiting for her perusal.  If the GOP is smart they'll send a little birdy to whisper in her ear "don't sign it, don't sign it."  You see, the Republicans want to win a presidential election and in order to do that they need to come across as more moderate, more friendly to all races, creeds and orientations. Did the 2010 law in Arizona hurt them?  I'd say most assuredly with the Latino vote.  Why would you vote for a party that hates you?  Thanks to the science of genetics it's estimated that 10% of all humans are either gay or lesbian.  That's a big voting block.  If they had the other 90% the Republicans wouldn't have to worry about it, but they don't.  They barely have 40%.  Woah!  And every time a state sends a message of hate that percentage drops.  Someone should tell this to the Republicans of Arizona who are sitting so smugly in their state of hate.