Froome vs Wiggins, a tale of character

Later this afternoon Chris Froome is going to win the 100th Tour de France.  As he rides down the Champs Elysees, I'm wondering if he's going to be anticipating the win or reflecting back on last year's Tour.  Why would he reflect?  Because this year he is winning by such a substantial margin, over 5 minutes.  And I also remember how Paul and Phil practically swooned over his cycling  during the 99th Tour.  Sure, they bragged about Wiggins, which was normal since they're all Brits, but Froome seemed to get special attention from them.  What I'm saying is he could have won last year's Tour but gave it to Wiggins.  I think from this year that's pretty apparent. 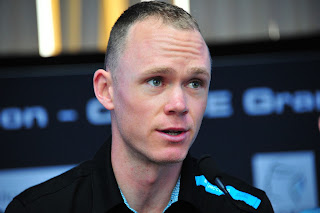 So, wouldn't you be reflective if you could have had two Tour wins under you belt rather then just one.    And think about next year.  What if he wins that Tour.  In fact, what if he could end up being the greatest Tour de France of all time... if last year had counted.  Imagine possibly sacrificing a record of achievement so Wiggins could win one Tour de France.  In my book, that takes a lot of character.  I also think it says quite a lot about the character of the cyclist who wins basically by default.  In that person's case it's all about the winning and not about the cycling.  I suspect that in Chris Froome we see someone who is all about they cycling.
Posted by Dave R at 10:51 AM