Of course there is a lot of chatter out here about Marco Rubio's lunge for a glass of water while giving the GOP rebuttal to the State of the Union.  I suspect the GOP has a bigger problem then a thirsty spokesperson.  It seems like almost every time I turn around his face is being flashed on the TV screen or there is some sort of really not so very newsworthy item on the Internet.  I suspect this is because there were a lot of lessons for the GOP to learn after the 2012 election, one of them being they did not appeal to Latino voters.  Duh.  So, their game plan changes and they pick a nice looking Latino man to become part of their changing public image.  You have to admit he does look rather clean cut and is evidently not from the barrio. 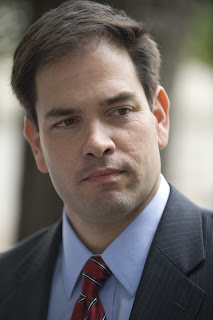 Unfortunately he has already had some sort of GOP fallacy issues, one them being his claim his parents fled Cuba to get away from Fidel Castro.  This seems not to be the case, in that they had actually emigrated to Florida three years earlier.  The hook is to get Latino voters interested, and then run two other candidates president and vice president.  I mean, how bad can a political party be if Mr. Rubio is a member?

I've seen recently Mr. Rubio has already stated he would not be running for president in 2016, of course this is one of those statements politicians have been making since the dawn of time.  However, I believe this statement might actually be true.  Another thing the GOP learned was just how racist their base was, which is rather telling in regards to the possibility of Mr. Rubio making a run for the White House.  I sure both he, and the GOP hierarchy, realize they have quite a problem on their hands.  If these Tweeters weren't going to vote for a black man, they're not going to vote a Latino either.  The only thing the GOP can do is the old 'bait and switch,' bait them Rubio and pray Latino voters will vote for some white bread guy instead.