Not your Average Saloon Girl

It's Saturday, June 1.  Being the first Saturday of the month, we have our Kid's Workshop.  Because the weather is supposed to be nice, we are going to be swamped with kids, well over 300, who's parents fail to comprehend we are a warehouse home improvement store.  We block aisles and use lift equipment.  Many of our customers have long since passed through the 'parenting stage' and now see so many children as a nuisance.  Because the mothers and fathers of the 'over 300' don't understand this, chaos will reign.  I'm seriously thinking of requesting off the first Saturday of every month.
For those interested in purchasing a paperback copy of "The Body in the Tower," use this link:  it's in 'books' at Amazon.  It's 278 pages long, which is 41 pages longer than the first book.  And remember, reviews... reviews... reviews.  They are important.  I buy a lot from Amazon and I usually try and leave reviews.  Mostly their good.  Every now and then I buy something that's not quite up to snuff and I let them know.  Hopefully, your reviews will be good.
And regarding the new project:  my original notes called for a restaurant / diner, similar to Denny's.  Last evening, however, I realized that wasn't going to work.  The current day Rattler's Den (town name) needed something more, something with a little more pizzazz.  So while I was doing my cardio, I started thinking about saloons, something a little crusty, a little touristy, and, of course, something from my childhood popped into my head. 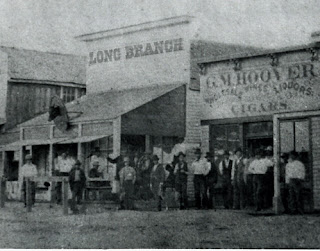 Anybody out there remember Miss Kitty?  She was not your average saloon girl.
Oh, and by the way, the Idiot Jerk has threatened Mexico with a tariff... because of the immigrants.  Humans have been migrating for thousands of years, but the white Republican party doesn't like migration, the flow of human beings from one location to the next.  They want to build walls.  Maybe, instead of doing that they should read a little chapter from the Old Testament called... Exodus.  I mean, they were brown people, too, in fact they looked a lot like Syrians, and Iraqis, and Saudis, and Iranians... but don't tell that to the Evangelicals.
Oh, and the administration also downgraded India out of 'favored nation' status in order to raise export prices to them.
In case you didn't realize it, the Idiot Jerk in the White House is a terrible businessman who's only good at selling lies about his business acumen.
Posted by Dave R at 6:48 AM