Friday... my 2nd day off.
I have an appointment this AM with a VA optometrist.  I do need to get my glaucoma drops refilled.  Hopefully they'll be able to do with without my having to see an Ophthalmologist.
I went to see Deadpool 2 last evening.  Even though I liked the film a lot, in my opinion the first Deadpool was better.  The humor in the 2nd installment is much darker.  The ending does try and resolve this, which was nice.  The only problem I had with it was the "time issue."  Bit of a spoiler here, though not much of one.  The Josh Brolin character comes back in time to solve a problem.  In fact, the use of time to fix a problem seems to be quite common in science fiction / fantasy.  Captain Kirk did it how many times in Star Trek.  Superman spun the earth backwards to bring Lois Lane back to life.  Oh, and "The Avengers, Infinity War 2" and something's going to need to be done to fix the ending of part 1.  Changing the past might actually make the future worse.  Nobody thinks of that.  This is because people look at an isolated event.  Things are much more complicated than that.
Look at the North Korea mess.  Where's the Republican chatter about the Peace Prize now?  Or the Idiot Jerk reneging on the supposed tariffs for the Chinese tech industry?  On that last one, I still think that has more to do with both Ivanka's and the Idiot Jerk's trademarks than anything else.  He's a deal maker, remember, and nothing's more important to him than his own personal gain.  He sees his supporters as nothing more than tools for enriching himself.
On a lighter note, all the branches torn from the maple trees behind my house have been sawed into smaller chunks.  They are piled on the back side of the fence.  As I looked at them yesterday, I thought to myself, "gee, maybe I should get a wood chipper."  Nah.
My roses and peonies are all in bloom even the ones in Little Stonehenge. 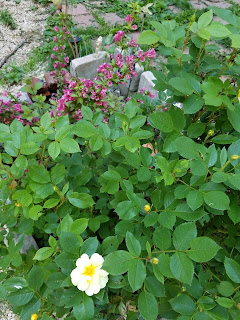 I have four rose bushes in my back yard, two peonies, and a shit load of Rose of Sharons which I'm starting to rip out.  Oh, and some beans I planted earlier are beginning to grow.
Posted by Dave R at 8:39 AM