Well, I celebrated yesterday being my 6th day in a row by slicing the side of my forefinger with a carpet knife.  Not a long cut, my fingers aren't that thick, but the blade went about as deep as you can go with cutting bone.  Pissed me off.  I looked down after I'd done it and said "fuck."  It didn't hurt, but boy did it bleed... drip, drip, drip, as I walked to the paint department to get a band-aid. One of the associates asked if I needed stitches.  "Nah," I said.  Then she said "you should at least use a butterfly bandage to hold it together."  Gimme a break.  Last night when I got home, I squeezed on some neosporin and changed the bandage.  This morning?  There's just a thin, red line.  I heal fast.
Today is supposed to be nice.  Unfortunately, I'm going to have to waste it by getting out the chainsaw and cutting up all of the branches ripped from the trees behind my house during the last storm.  And there's the problem with the lawn, which desperately needs to be cut... mowing is out of the question since the last week of steady rain has turned it into a field.
Oh, and for those who didn't hear, a Federal Judge decided that the Idiot Jerk in the White House can no longer censor who responds to his Tweets.  This doesn't mean he's actually going to read the comments.  I have no doubts and aide does that, only showing him the ones praising his benefice.  Still, no matter how he wants to dice it, his 'get real Donald' (or what ever it's called) Twitter account is going to be flooded with anger and hatred.  People are going to slice him to ribbons.  He's going to look at one of his aides and say "yo, show me the Luv," and they're going to show him a screen that says "eat shit, scumbag."
This is life, and the Idiot Jerk does not handle reality well. 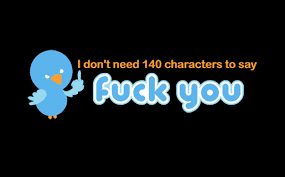 Gee, I hope that image isn't too graphic... perhaps I should have posted one of my finger.