Over 12 miles on teeny weeny legs

Well, I went to see "Infinity War" last evening.  Some spoilers:  Chris Evans has a beard.  Thor gets a new eye.  One character says "no resurrections this time."  That's hokey pokey. This is the Marvel Cinematic Universe.  I liked "Infinity War."  My only complaint might be the levity.  A lot of the drama was offset by comic relief.  There's is nothing wrong with savoring the juices of drama, I don't see a need to sweeten them up with a laugh - there are times when that sounds forced.  What some people... well, maybe a lot of people didn't seem to understand is that this was Part 1.  Part 2 gets released in 2019.  Oh, and there's a cliffhanger.... a really, really big cliffhanger.  If that ending troubles you, don't worry - everything works out in the end.  Believe me.  In fact if you watch the film carefully, and listen to what is said, you will understand just how Part 2's happy ending will be achieved.
In fact, the only problem I had during the movie was with my legs.  I rode over 12 miles yesterday.  My lactic acid levels were high.  About halfway through the film my right quads started to cramp up.  Have you ever had a cramp in your foot?  Well, that's what was happening in my right leg and believe me, it's difficult straightening out your leg in a movie seat.  And then, a few minutes after the right quads stop cramping... you guessed it, the left started up.  Luckily there was no one sitting to my left so I ended up stretching both legs in that direction.  What I should have done was go stand by the wall, but that would have meant going past the rest of the people in the row.  In a way, you could say I was suffering for Pop Art.
Oh, and I took a snap after the ride. 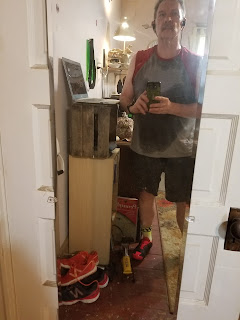