Well, here it is Wednesday and I have the day off.
My neighbor's sewage problems are far worse then they thought.  Yesterday 6 feet of cast iron sewage pipe were removed - filled with rocks and debris (and I don't use the word debris lightly).  PVC piping replaced the damaged pipe.  They checked my side, and there's no drainage problem.  There's still more blockage, however, on their side, so the plumbers are back today.  They're going to use pressure 4000 psi to blow out what ever blockage is left in their pipes.
I had breakfast with my brother this AM.  Pickpockets hit is wife at Michael's, took her wallet with all the credit and debit cards.  In the 15 - 20 minutes she spent browsed the store before heading to checkout, they stole almost $7000 by buying gift cards at a Target 2 blocks away.  Of course, Target shut down the gift cards and the debit and credit cards are all frozen.  They didn't really lose any money, but this has been a learning experience.  Her wallet was filched from her purse, which was setting on her shopping cart, when she turned to answer some questions from a man to her rear. This is how it goes.
Evidently the great big super tax cut the Republicans isn't working the way Republicans said it would.... so says Marco Rubio.  Now why am I not surprised?  Probably because Republican tax cuts have always played like a broken record... they keep repeating the same faulty belief that American Corporations will use their breaks to reinvest in the American Worker.  Truth is they do, but only in a very minor way.  Mostly they buy back stocks, give bonuses, and pay dividends.
And a funny thing is happening on the way to the Texas Midterm election.  Rafael Cruz is being challenged in a big, big way by Beto O'Rourke.  Not only is Beto raising big bucks, he's challenged Rafael to 6 debates... 2 of which are supposed to be in Spanish.... Oops.  Seems as though Rafael's Espanol is not so great... not so good, well, maybe he's as good as a beginner.  This is about what you'd expect from a Republican who's trying to put a lot of distance himself and his ethnicity.  Oh, and by the way, in case you didn't know, Rafael is the son of an immigrant.
And finally, it seems as though the Idiot Jerk in the White House takes Propecia  His personal physician prescribes it for him.  Maybe we should all be digging Propecia, picking it up anyway we can.  Why?  Because Propecia apparently does amazing things to hair follicles, tickles and stimulates them.  If we all took Propecia we could all have hair like this!!! 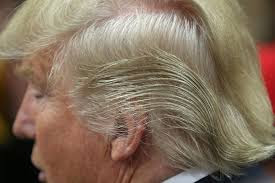