Other things and... the plug

At this point around 74% of Americans are accepting the fact that Donald Trump is our 45th president - that doesn't mean they like that fact, just that they are accepting it.  As time has passed since that fateful night more information has been made apparent.  This is a good article from the Chicago Tribune.  She won the popular vote, but by less than 1/10th of a percent, if you look at all votes cast.  The Clintons like to do what they want, even if it might be questionable, and they don't seem to understand that if it's questionable their opposition can easily hammer it into a negative perception.  Her private server is a perfect example.
And then there's Trump who played his hand well.  Millions believed every word he said... except....
Now the "Wall" may not be built.  We may get something that has a similar effect, which is probably going to be more boarder patrols.  Evangelicals voted for him a big way.  He got more white Evangelical votes than George W. Bush.  On the campaign trail he was the most socially conservative candidate in history... except... he wants Rudy Giuliani as his AG and Giuliani is... Pro Choice.  Oops.  And Trump has never been as stringently anti-gay, what were they thinking?  They needed to look at the way he's treated contractors, signed contracts and then reneged, and filed for bankruptcy to get out of paying just about anything he didn't want to pay.  He told them what they wanted to hear.  They haven't hit their WTF moment yet... but it's approaching.
And then there's the plug.  That new lamp I bought?  Well, it has a rubber plug on it.  Not plastic, rubber and Big Seig thinks he has to chew it.  Twice so far.  Last night I got home from work and he had pushed the table and my Morris chair out of the way to get to it.  The cord was still attached to the lamp, however I found the plug on the sofa.  He got yelled at, and a swat on his butt, which, when you're a 108 pound Boxer is nothing. 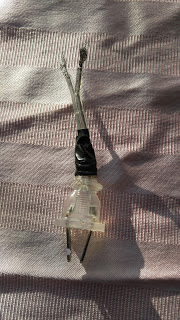 And he looked at me with the big brown eyes and even though he can't talk I knew he was saying "oh I am so so sorry and I promise never ever ever to do it again," all the while his little stub of a tail wagged back and forth ever so slowly.  So, of course, I had to forgive him.  Am I easy or what?