It's been so long since I've written anything, and I've been so busy, but that's not really a very good excuse.
Anyway, yesterday was the big roll out for Windows 10.  I'm getting it free on both my laptop and my desktop.  The desktop was done yesterday afternoon.  On the positive side, well, I like it.  The 'Start' button has returned in a way.  Your Apps are still tiled, but they're more nondescript, there's no indication that it was designed specifically for 'touch screens,' the major flaw of Windows 8.  Functionality is simpler.  In fact, as far as I could tell, there was only one fly in the ointment, and, of course, for me it was a very big fly.  You see, the desktop is a gaming computer.  While it does everything else a regular computer does, its graphics card is designed specifically for gaming.  Where your average video card is adequate, mine is super fast, processing so many bits of data it requires 2 fans independent of a separate computer fan.  I have an Nvidia GeForce 760 GT card.
Yesterday, after installing Windows 10, I clicked on the Nvidia icon and was informed the card was not installed in my computer.  Not only that, my screen resolution was so LARGE. 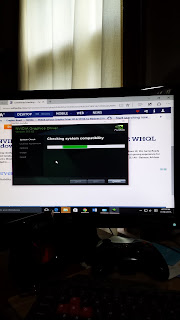 It seems that the drivers Nvidia sent out which were supposed to be compatible with Windows 10 are not.  Of course they sent out a quick fix, however it's not a really good patch.  The screen resolution has been fixed, but I can't personalize my computer, can't change background, can't chance colors, can't do anything.  And, when I click on the Nvidia icon, it still says the card is not installed.  The Nvidia forums are filled with verbal screams of agony from others who have a lot more invested in gaming then I.  Of course it's just a matter of time until this issue gets fixed.  And I understand it's not just Nvidia who is having issues, AMD is also having problems.  It's an AMD video card I have installed in my laptop...  which is why I'm waiting to install Windows 10 in that piece of equipment.