Today was my second last day at PT and my therapist talked to be about my plans... he did not recommend I keep up the therapy until seeing my doctor, which was nice.  He did, however, introduce me to a number of new, core strengthening exercises.  Actually, they're not new.  As he was describing the first position he wanted me to get into, I said, "oh, you want me to do a plank."  He was a bit surprised and said, "oh, well, yes."  They're even going to print off some work-out routines I can do either at home or at the gym.  I didn't ask if there was going to be a charge.
Anyway, after PT I stopped by the store to speak to the manager because I was scheduled to open.  Opening shifts are off limits to me because that's when you mix all the 5 gallon buckets of paint for contractors and I, for the foreseeable future, will not be lifting any 5 gallon buckets.  When I told him that I was now doing planks he said, "I know how to do planks, I can hold one for a minute," and I had to contain myself. 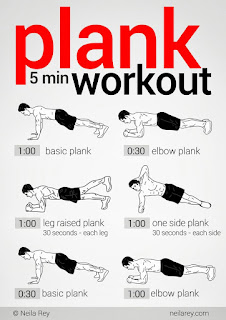 You see my store manager is about 6' 1" and weighs in at about 265 lbs.  I am being very kind when I say he has some girth.  Now this doesn't mean I don't believe him when he says he can hold a plank for one minute.  It's just that I suspect he might have a little mid-section assist going on.  I just have to remind myself that even if his abdomen is only 1/4 inch off of the mat, for some people in a quarter inch can be as much as a mile.