The gym and I

That's right, I joined a gym.  Today.  At first I'd thought of joining LA Fitness since they had the "one" rowing machine my therapist had recommended.  The cost there, however, was a major drawback:  a high $ to initiate a bare bones, basic membership, and then a monthly fee of $30, and that's just to start.  If you want access to a trainer you can start tacking on even more $$ per month.  And, of course, there are other amenities which jack up the price.  If you're not careful, you could easily find yourself being charged over $100 a month.   Now if you don't mind spending that kind of money, or feel that charge is giving you the most bang for your buck, then I'd say hop to it.  Me, however, I'm a bit on the frugal side.
I opted to join Planet Fitness.  I did chose the top tier, $19.99 per month membership since that gives me half-price cooler drinks!  Actually, you do get a bit more for that tidy, little sum.  And, surprise, surprise, that fee does give you talk to a trainer, in fact, on your first visit you need to set up an appointment in order to get a routine worked out.  Hey, I'll even be able to use their tanning stations!  I've been bright white for so long I've no idea what it feels like to be tan. 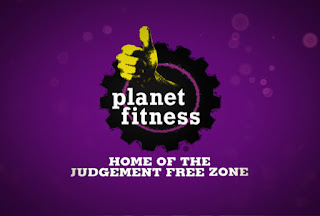 In case you haven't hear of them, they're mostly up and down the eastern seaboard, but quickly moving west.  Not too long ago they made a bit of a headline.  Evidently a woman complained to the desk  about a transgendered woman using the "women's" locker room.  The reps at the desk shrugged and said, "so what," which infuriated this woman, so she took her complaint to corporate and they shrugged their shoulders and said "so what."  Well, that's not exactly what they said, but it gets the message across.
Anyway, now I have a gym membership, now all I have to do is get my ass in gear and go.