Some times I look at the things making the news and I think, whoa, that's not newsworthy at all, like things about the Kardashians, and things about Putin.  Both he and they seem to be totally focused on self promotion.  Like this clip of Putin scoring eight goals.  I laughed at it.  The only thing that would have made it funnier would have been if he'd stripped off his jersey and flashed us one of his famous nipple shots while simultaneously hitting the puck into the goal.  I'm sure if he knew Kim Kardashian could score eight goals with a champagne flute balanced on her ass he'd try that, too.

Of course, maybe his pucking around is considered more newsworthy than the fact that another one of their rockets has crashed.  I'm not counting, but isn't that like 2 in 3 weeks? 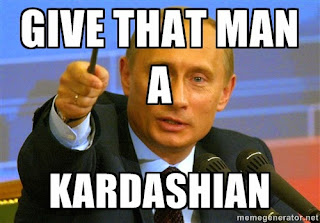 On the serious side, I really did enjoy the trailer for Dwayne Johnson's new movie which played before Putin on Ice.  You see, I really do like a good disaster film.  If it makes a lot of money perhaps, and this is a really, really big 'perhaps,' but maybe if "San Andreas" is a hit, Dwayne could help out with Russian economy  since I've heard it's not doing too well.
Posted by Dave R at 3:31 PM