No problem with BJ

Do you ever wonder about certain nicknames?  I do.  Not those shared among friends, but those some people actually use as a moniker, in particular those comprised only of letters.  JT for example.  We have one of those where I work, a gentleman who first name does not begin with the letter 'J.'  His first name is actually Harold, yet everybody calls him JT.  And then there is that ubiquitous BJ.  Back when I was working Human Resources I once hired a girl named Alice.  I was taken aback when she told me every body calls her BJ.  When you mention BJ to a guy there are certain things that automatically pop into his head.  So, having a female tell you everybody calls her BJ is more then a little odd.  You have to question whether she knows what those letters imply to most men.

I play a lot of video games and right now I'm playing Wolfenstein, The Old Blood.  As a First Person Shooter, you are playing the lead character.  In this game his name just happens to be BJ Blakowicz, he's an American, and he's killing Nazis.  So what does he look like?  Take a gander below. 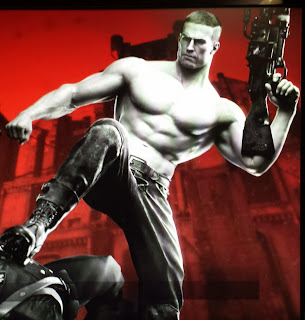 This is taken from the menu screen,  And he's shirtless.  And he's muscular.  And he's holding a phallic symbol gun.  Oh, and let me repeat myself, his name is BJ Blakowicz.  So, what's going through your head right now?  Me?  I don't have a problem with this BJ.