I did want to comment on this picture I'd seen recently on Towleroad with Kim Kardashian (I suppose her last name is spelled correctly) and Larry Kramer.  There were a number of negative comments because, well let's face it, she isn't exactly know for her AIDS activism.  In fact, as far as I can tell, the only thing she's really known for is her own self promotion.  Looking at this picture, the first thing I noticed is that neither of them is looking at the person taking the picture.  No doubt they are looking at a photographer to their left.  In fact the person taking this picture seems to be more interested in zooming in on her tits.  Larry Kramer may be in the front but it's the cleavage that's centered.  How this particular picture made it to Towleroad is beyond me.  Indeed, why she was even at the event gives one reason to pause.  Maybe she was supposed to be the scheduled entertainment.  We all know she can balance a champagne flute on her ass, maybe she does that stunt publicly. 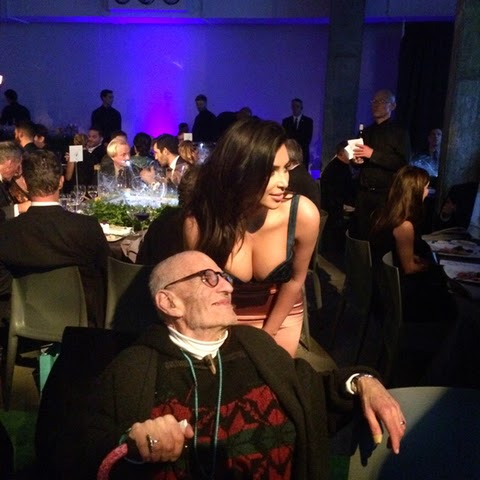 Wouldn't that have been something to see live?

I don't understand this fascination some people have with this Pop Slut, I mean let's face it, that's all she is.  She can't act.  She can't sing.  I do believe she was exposed in a sex tape at one time.  Now, isn't that something to add to your resume?  Still, when I went out looking for a watchband last week I saw that she actually has product endorsements.  Who in their right mind would buy something endorsed by Kim Kardashian?  Why would you want to spend good money on something that's guaranteed to be cheap?