Disney defangs Into The Woods

I saw Into The Woods the other night.  It was okay.  I saw it a long time ago on Broadway, and have seen it twice since then in regional theater, so I'm somewhat familiar.  Disney is fairly true to Act I, just a couple snips here and there, but nothing is really changed.  Like just about everybody else, I feel Depp and his zoot suit should be been replaced, but that's another story, isn't it?  Anyway, if you've ever seen the show you will know that Act II has a bit of a bite.  Disney, in their attempt to maintain a PG rating pulled most of its teeth.  That was a mistake.  What the audience is left with is something which meanders without much purpose.  Warning, here come what some might consider spoilers. 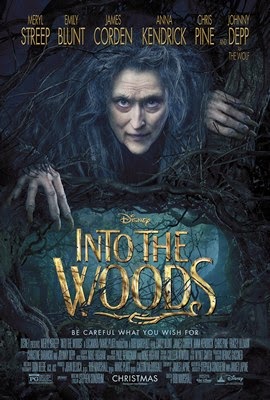 In the show Rapunzel is crushed to death by the giant, not so in the movie where she rides off with her prince.  In the show the Town Crier kills Jack's mother by hitting her over the head with his staff.  In the movie he pushes her and she has a heart attack... yeah, that's right.  In the show the witch shoves the Town Crier to the giant telling her it's Jack.  When the giant finds out it isn't, she hurls him away... through the air... but not in the movie.  That's 3 deaths which didn't make it to the silver screen.  Don't forget the Baker's wife, who seems to step out of frame in the movie.  You find out late she has actually fallen off a cliff.  Believe me, that's not how it happened in the show.  And then there's the Agony reprise, in which the two princes lament on how they've both found two more beautiful maidens, unfortunately they have to go back to their wives.  That's not in the movie, either.

What's funny is that for years I've been reading how Disney desperately wants to win a Best Picture Oscar... hell they're desperate to have a live action film nominated.  They might get a nomination this year, but they won't get a win.  The Best Picture Oscar tends to go to movies which have a little bit of a bite.  Into the Woods, unfortunately, was defanged by Disney in order to get a PG rating.  Those extractions will cost them.

Email ThisBlogThis!Share to TwitterShare to FacebookShare to Pinterest
Labels: Broadway, Disney, Into the Woods