Day Off with mouse lust

So what do I do when I have a day off?  Well, today I took the dogs to the park.  There's no telling how much nice weather we're going to have so I get them there as often as I can.  Then I spent some time cleaning up the yard... dogs, you know?  That and the leaves which need to be racked.

This is actually the first of 2 days off in a row, so mostly I relax, nothing too strenuous.  Tomorrow I'll get on the bike (which is on the CycleOps trainer) and try and put in about 25 miles.  Cardio, you know?  Until we start getting snow.

I made an appointment for Lilly to get her second year rabies shot, after that she'll be good for 2 more years.  My Vet sends me postcards listing all the things they want to charge me for which aren't necessary, like a 'fecal parasite test.'  They will run that test every year unless politely put a stop to it - she has been wormed after all.

My new gaming mouse arrived today - actually the postman dropped it off while I was out cleaning up the yard. 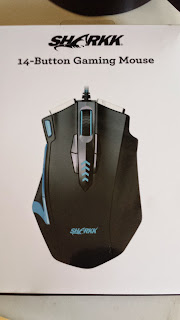 I play games on both a large laptop and an aging Xbox 360.  I've owned 3 laptops and have always bought a regular mouse.  I hate those little pads you're supposed to finger.  Give me something I can grip in my hand!  And if it has 14 programmable buttons?  It's almost mouse lust.